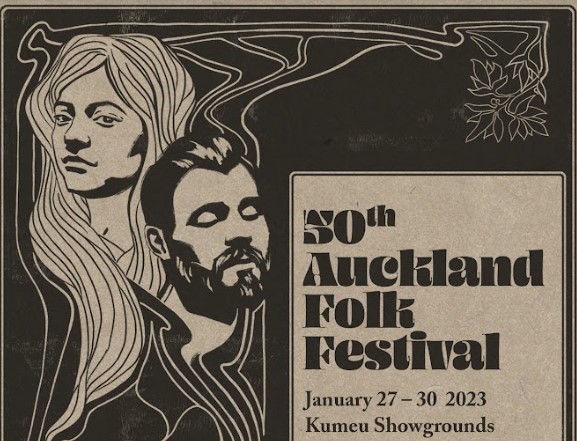 In 2023 we are so happy to be welcoming a wide variety of exceptionally talented, international, and local artists,  continuing to push the boundaries of the genre, with music to surprise & delight! The huge music lineup sits in 2023 alongside a special 50th birthday celebration program. Early bird tickets are now on sale so get in quick!

In no particular order for 2023, Melbourne/Naarm-based Folk Bitch Trio blends the voices of Heide Peverelle, Jeanie Pilkington, and Gracie Sinclair into lush three-part harmony, with a style that draws influence from contemporary and traditional folk, alt-rock, and pop.

Edinburgh-based The Jellyman’s Daughter is gracing New Zealand stages for the first time. Singing with an affinity and closeness that can often have audiences puzzling over who is singing which harmony line, Emily Kelly’s honeyed voice, and Graham Coe’s soft introspective tone have an almost matching vocal range, like a fantasy collab between Norah Jones and Elliott Smith.

TE KAAHU honours the craft and skill of Māori songwriting and storytelling and is the brainchild of singer and songwriter Theia (Waikato-Tainui, Ngāti Tīpa). Her critically acclaimed debut album has seen her receive accolades including nominations at the Rolling Stone Awards, Aotearoa Music Awards, and a Top 3 Finalist in the APRA Silver Scrolls Maioha Award.

From the United States is Sneaky Bones (Matthew Bean). Without needing to be categorized, Sneaky Bones is pure American folk music. The foundation of simplicity in words and music is ornately decorated across the sonic spectrum, freely roaming through the colors and tones of both tradition and contemporary exploration. All the way from Ireland, acclaimed Irish fiddle player Manus McGuire has recorded 15 albums since winning the prestigious Fiddler of Dooney, Irish national fiddle competition at age 14 in the 1970s.

From across the ditch, we welcome We Mavericks, known for their uniquely gritty, evocative songs. Lindsay Martin’s masterful strings and vocals meet songstress Victoria Vigenser’s magnificent voice and driving rhythms in a connection that is hard to describe. This trip follows their sold-out NZ tour in 2022. Another taking the trip from Australia is the award-winning Kiwi Kerryn Fields, who grew up in Te Kuiti but moved to Melbourne in 2007 and spent years touring Australia, NZ, and Canada. After moving back to Australia post-pandemic, she cemented her place in the music scene, winning the AFMA Contemporary Album of the Year in 2021.

Known for his solid live shows and also returning from overseas we welcome back The Frank Burkitt Band, returning to Aotearoa from the UK, and reuniting with their NZ-based band members, after four years. Continuing with the raw live energy and magic onstage are five piece T-Bone. Storming onto the scene with their debut album Good ‘n Greasy, in June 2022, and debuting at number two on the New Zealand Album Charts. The eclectic group has Americana flavours and a Kiwi folk feel.

Stay tuned for traditional dance performance and songwriting competitions, dancing workshops for those who want to ‘give it a go’, children’s concerts and sessions along with plenty of space to relax and enjoy your surroundings.

The 50th Auckland Folk Festival will bring together a unique lineup of creative and talented artists for a very special 3-day celebration. Expect a fun weekend like no other, camping with friends and family, music, dance, stalls, food trucks, free showers, and toilets, just 15 minutes from the centre of Auckland City – what’s not to love!

Across the Great Divide

Songs from the Old Country